Palou Happy With A Good Day In Nashville 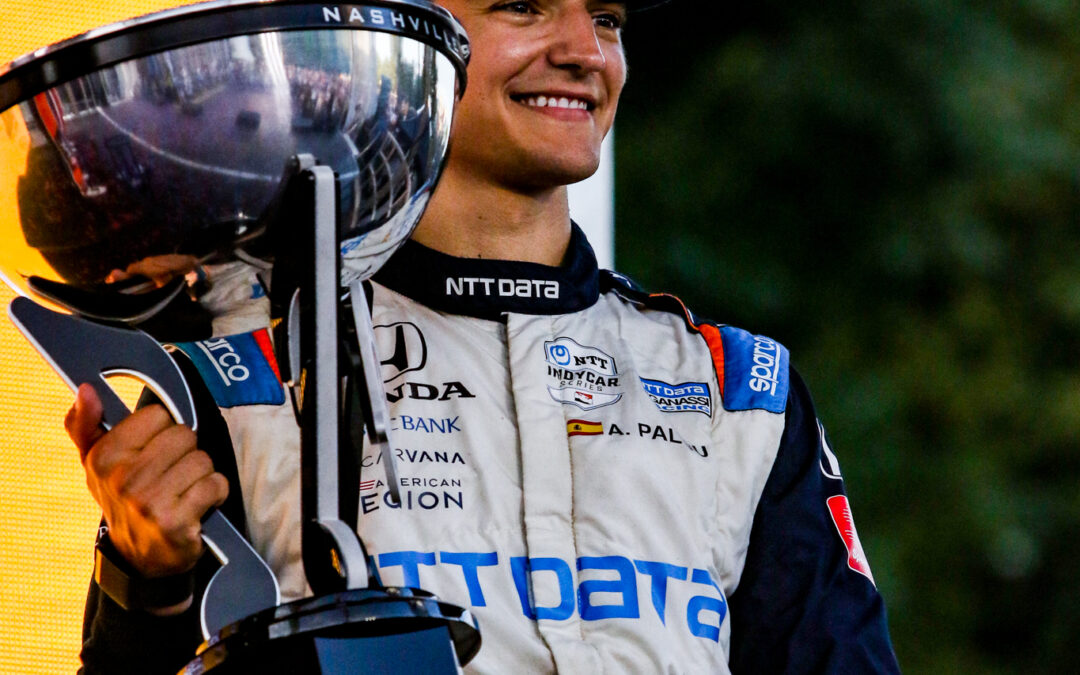 Defending NTT IndyCar Series champion Alex Palou in the No.10 NTT DATA Chip Ganassi Racing Honda says he was happy with what he described as a good day in Nashville after coming from sixth oncthe frod to stand on the podium in third place.

The Spaniard also confirmed in the post race press conference that he had spoken to team owner Chip Ganassi following the race who came over to congratulate him.

It had been reported that it was the first time that Ganassi had spoken to Palou since July 12 however, Palou put that rumor to bed saying that he sees Ganassi at the meetings in hauler during race weekends.

“I thought it was a good day for the No. 10 NTT DATA Honda car. The team did such an amazing job with the pit stops and strategy all day. I’m very happy and it was well deserved for the team, and for Scott Dixon, as well. It’s time to push once again to get this NTT INDYCAR SERIES championship. We got one step closer, but a long way to go.”

It was a frustrating day for last year’s race winner Marcus Ericsson in the No.8 Huski Chocolate Chip Ganassi Racing Honda as he was forced to retire from the race having started from P18.

It was a crazy race here in Nashville. First, congrats to Scott and the No. 9 team for the victory and Alex for the P3 result. For us, we got hit multiple times, cut tires and yellows falling at the wrong times, but we still kept fighting through the whole race. We got ourselves up there to a top-5 at the end off another restart, but unfortunately, got hit again and the car just couldn’t take it. We tried to get to the end, but it was just not possible with the damage. Extremely disappointing because I thought we had a great race, great pace in the car and the driving was really good, as well. I’m proud of the effort from the No. 8 Huski Chocolate crew and how we kept fighting. Didn’t get the result we deserved, but we’re very much in the mix and looking forward to Gateway and the last few races.”

Jimmie Johnson in the No.48 Carvana Honda had a strong day until he hit the wall hard forcing him into a retirement and speaking following the race he said:

Unfortunately, we didn’t make it to the end of the race today. Had some contact in the race and some suspension damage. We were setting up to have a really strong finish and something happened during turn four on the lap I crashed. I’m not really sure why, but the car started bottoming badly. Tore up the car and unfortunately, didn’t get to the finish line. It was a great effort from everyone, just sad we didn’t make it the distance.

Scott Dixon in the No.9 PNC Bank Honda was delighted with his second win of the season and 53rd of his incredible NTT IndyCar Series career saying after the race.

We knew the No. 9 PNC Bank was fast all weekend. Kudos to the team; we had a big crash there and took half the floor off the car. We had to take four turns of front wing off, so we had no grip. I think we did about 45 or 50 laps on that last set of tires. Nashville is awesome and that was such a wild day. These ones are a lot of fun because it’s such a team effort and for all that we achieved.”