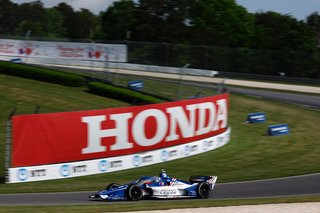 “It was a busy session; it was really close. The car was really fast, and we were
improving every session. I’m really happy with the #10 The American Legion Honda and the
starting position [third] for tomorrow. Same place we started [the race] in last year, and we won
it.”

Alexander Rossi sang the praises of his Andretti Autosport team as they came together to help repair his No.27 NAPA Auto Parts, AutoNation Honda, following his crash in practice on Saturday morning as the car was back on track for qualifying and resulted in the 2016 Indy 500 winner being the highest place Andretti Autosport qualifier rolling off from P5 on the grid.

“I’m so grateful to everyone at Andretti Autosport. Not just my guys, but guys from all my teammates cars and the Honda engineers. It was a thrash [to complete repairs after a crash in morning practice], so I just appreciate the efforts in getting me back out there. Fifth is fine. You’re always hoping for a little bit more in qualifying, but we’ll go back, look at the data to see where the car’s actually at, and go from there in the race tomorrow.”