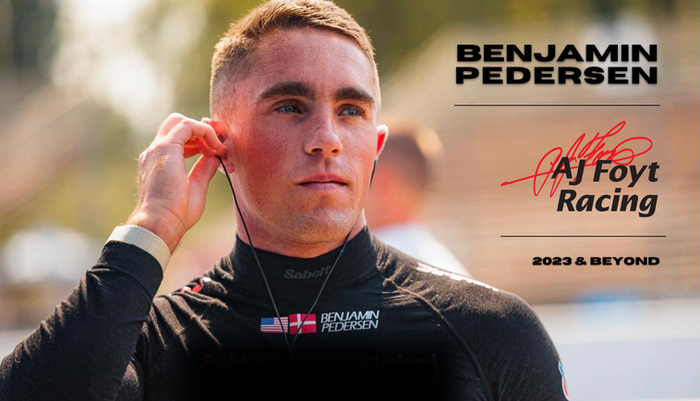 AJ Foyt Racing announced on Thursday that Indy Lights veteran Benjamin Pedersen will drive one of their cars in the NTT IndyCar Series from 2023 onwards having penned a multi-year contract.

I’m super excited to get going with the team. “I’ve spent a lot of time this season with AJ Foyt Racing learning the ins and outs of making the jump to INDYCAR and it’s been really nice to do that in conjunction with my Indy Lights season. INDYCAR has been my target goal since I started open wheel racing in 2016. The racing, atmosphere, fans, events, tracks, etc. are all awesome.

We are really looking forward to having Benjamin as part of the team. “His enthusiasm is infectious, and he is 100% committed to INDYCAR, AJ Foyt Racing, and doing the best he can to win races. It’s been great to have him embedded with the team this past season, and everyone is excited to hit the ground running when testing begins. It is also great to have a multi-year program in place, which will help him and the team grow together.”

Pedersen went on to say:

The Indy Lights Series and car serves as the ultimate transition into INDYCAR. “From a series perspective, Indy Lights goes to the INDYCAR events, so we share the same weekend format, points, rules, race director, etc. This makes the transition very natural to INDYCAR as all of these things will stay the same. From a car perspective, I can say firsthand that the Indy Lights car is a great car to transition from since it really rewards pushing to a high limit and almost over-driving a bit on the peak of the tire.”

Speaking about his maiden IndyCar Series test a few months ago, the Danish/American said:

When I had my debut Indy car test a few months ago, it was a very successful day topping the time charts and I found it very natural to transition into the Indy car,” said Pedersen, whose car will operate out of Foyt’s Speedway, Ind. shop. “The biggest differences were the brakes, dampers, tires, and aero. You have a much higher sensation of grip compared to the Indy Lights car and I actually felt the Indy car was a bit easier to drive in many regards. The carbon brakes are the biggest difference, and they allow you to brake so late and hard, and when combined with all the other things mentioned above, it’s nearly impossible to lock the brakes on the initial brake phase due to how much grip there is. It’s just a really enjoyable car to drive that really rewards attacking the brakes and also asking a lot of the tire laterally (side to side).”