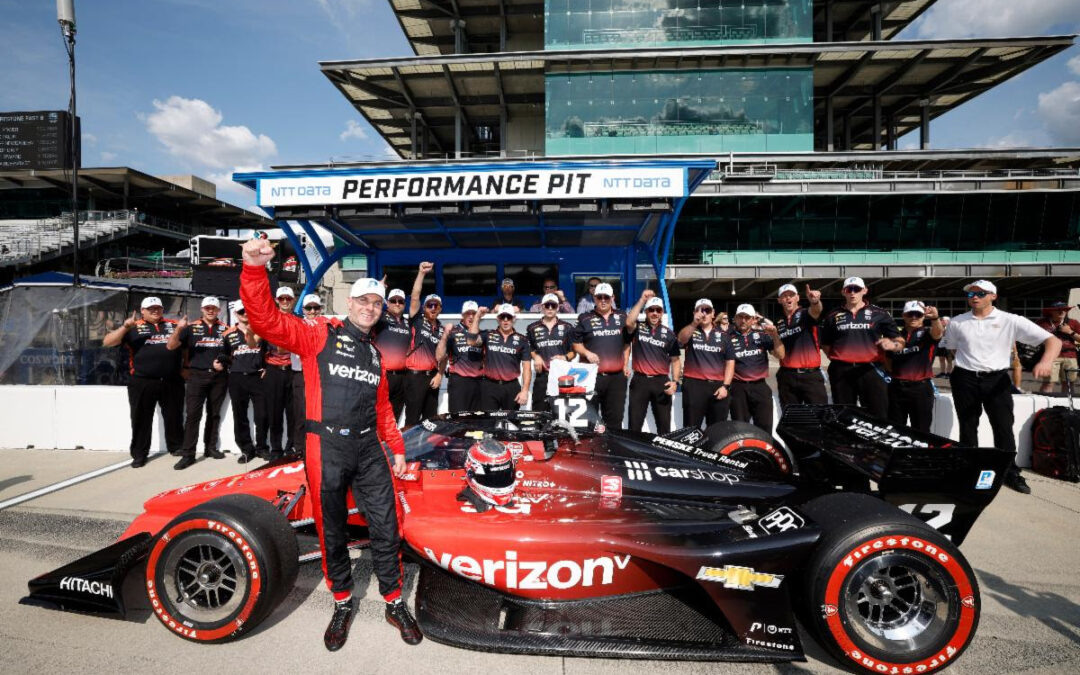 Team Penske’s Will Power in the No.12 Verizon 5G Chevrolet made it five different pole sitters in the opening five races of the 2022 NTT IndyCar Series season as he claimed the NTT P1 Award for Saturday’s GMR Grand Prix of Indianapolis on the IMS road course, his fifth at this event and his 64th career NTT IndyCar Series pole position to close with three of IndyCar Series legend Mario Andretti’s all-time record of 67 poles.

Speaking to Paddock Eye following the session, Power said that there is nothing specific that he can pinpoint to his success at the road course in Indianapolis other than the fact that it is a track that he enjoys.

Speaking about the new LED light system that has been used this weekend at IMS, Power said that it is something that he welcomes.

Arrow McLaren SP had two of their three cars in the Fast Six with Pato O’Ward starting the race in sixth just ahead of Felix Rosenqvist who rounds out the Firestone Fast 6.

Juncos Hollinger Racing’s Callum Ilott starts the race from seventh place which is a fantastic result for the Brit who had his first-ever NTT IndyCar Series test here last year. The Englishman set a time of 01:09.6530s and starts the race ahead of Rahal Letterman Lanigan Racing’s Christian Lundgaard and Jack Harvey.

Romain Grosjean in the No.28 Gleaners Food Bank of Indiana Honda rounds out the top-ten with a time of 01:09.7100s. Speaking following the action, the French-Swiss driver said:

“Top-ten finish in qualifying. Obviously, not as good as we wanted but still good to be in the top 10. We’ve got some good ideas for tomorrow. Obviously, today was a very hot day, and the track temperature went super high. There are high chances of rain tomorrow, so we will see when the race happens. We have a bit of work to do on the setup, but we will be ready to have a good race.”

Starting just outside the top ten is Scott McLaughlin in the No.3 Snap-On Team Penske Chevrolet who set a time of 01:09.7847s and starts the race just ahead of Graham Rahal and Takuma Sato.

It was a disappointing qualifying for Andretti Autosport’s Colton Herta in the No.26 Gainbridge Honda and Alexander Rossi in the No.28 AutoNation NAPA Auto Parts Honda as they start the race from 14th and 16th place respectively having missed out on a place in the Fast 12.

“We just weren’t good enough today. We need a little more pace. Unfortunately, I thought that lap was pretty good, but the lap times never came to us, which was a surprise. It’s one of those things that makes your heads scratch. The car didn’t feel bad. It felt like what we had in Practice Two, but then again, everybody went quite a bit faster in Practice Two, and we kind of stayed the same. I was really happy with my car in practice, and we really didn’t touch it. Then we came here (qualifying) and were slow, so it’s something we have to figure out and make some changes for the race.”

“Difficult day here in general. It’s always disappointing when you don’t transfer out of your group. The No. 27 team was scrambling all day to find a balance – and I think we did for qualifying. There are a couple of things we’re going to look into as to why the ultimate performance wasn’t there, but it’s been a place we’ve struggled as a team. We’ve been in the front at times and then had weekends like this when we didn’t transfer out of our group. One of the mysteries of this place we haven’t quite figured out yet. The only good thing is we have two sets of reds for tomorrow, and I think it’s going to be a very heavy Firestone Alternate race. So hopefully, that can work to our advantage.”

“Qualifying is done here at Indy GP – I look forward to the race tomorrow. We tried something on tire strategy to work on the weakness we’ve had for this year in nailing that lap on the Firestone Reds. We got close to our teammates, within a couple of tenths of them, but didn’t quite transfer. We’re looking forward to the race tomorrow. It could be weather impacted, so there will be a lot of things thrown at us.”

Scott Dixon in the No.9 PNC Bank Honda will be hoping that the team has good race pace following a disappointing qualifying for the Iceman which sees him start the race from 21st place just ahead of Kyle Kirkwood and the returning Juan Pablo Montoya.

David Malukas and Tatiana Calderon start the race from 24th and 25th place respectively while Dalton Kellett and Jimmie Johnson round out the grid.