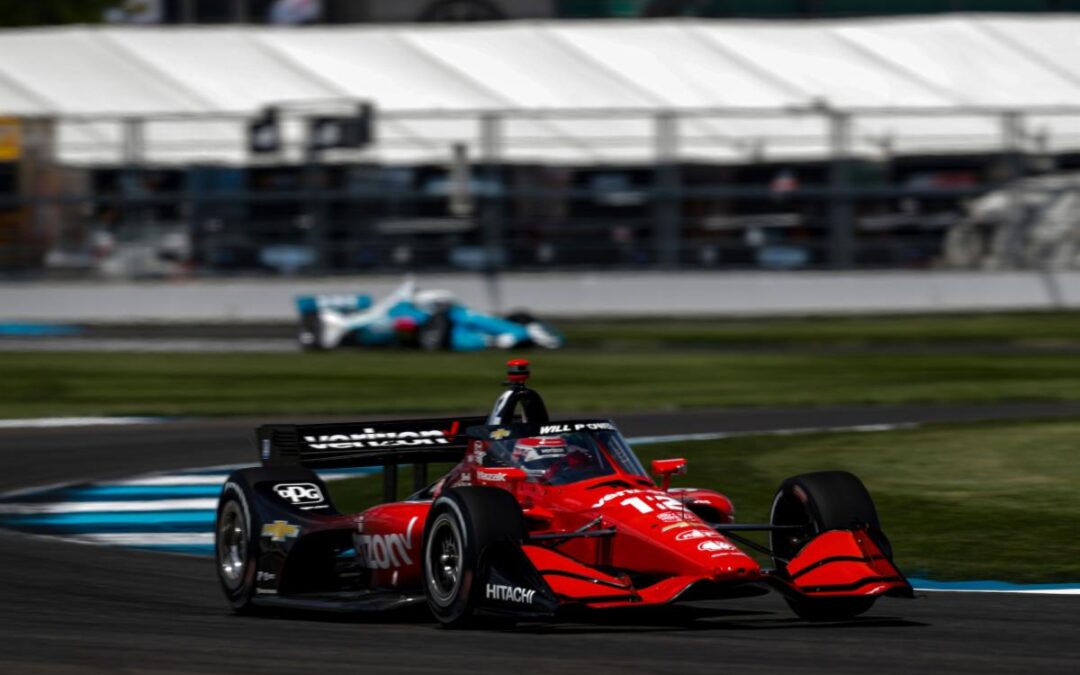 Team Penske’s Will Power in the No.12 Verizon 5G Chevrolet started Saturday’s Gallagher Grand Prix of Indianapolis at the IMS road course from fourth place and scored a third place finish and in doing so has reclaimed the lead of the championship by nine points from Marcus Ericsson.

TELL US HOW THIS DAY WENT AND WHAT MORE YOU MIGHT HAVE NEEDED? “Yeah man, it was a crazy start and some pretty questionable driving there at the beginning. It was a great recovery for us, and we kept out of trouble and then we were able to get to third. What a day.”

FOURTH TO THIRD SEEMS ROUTINE, BUT YOU WERE DOWN AS FAR AS 16TH: “It definitely was a rough start. I got pushed around in Turn One, I got pushed into Pato (O’Ward), which spun him. Then Helio (Castroneves) went for a big move and pushed me on the curb. It was a great recovery. You can never expect a normal day in INDYCAR!”

YOU HAD SOME COMMENTARY ABOUT THE DRIVING OF THOSE AROUND YOU AT THAT TIME. “It was just one of those things. Everyone is very aggressive. It’s so hard to win in this series. It’s the toughest series in the world, and everyone fights for position. You just have to keep it clean. Great job today by the Verizon 5G guys. It’s amazing that we can go all the way back there and recover to third, and thanks to Chevy for such great fuel mileage.”

YOU’RE LEADING THE CHAMPIONSHIP THROUGH YOUR CONSISTENCY. “That was the goal from the very beginning… to play the long game, and we’ve been doing that. We’re doing what we know, and that’s what I’ve been doing. I know this game so well, and I know it can change very quickly. But you take what you can get every day and every race.”

I’m pretty pumped. We needed one of those. To get from 15th to fourth in the Gallagher Chevy in the Gallagher Grand Prix was fantastic. The car was good. I was pumped. I was trying to push this guy (teammate Will Power)… I was like, ‘C’mon, let’s go!’ I had a bit of a blister on my right-front but he controlled it really well. We just missed out on the podium but a top-five was a great day for us.”

JOSEF NEWGARDEN, NO. 2 PPG TEAM PENSKE CHEVROLET, QUALIFIED 5TH, FINISHED 5TH”Good day for our PPG Team Penske Chevrolet. I am just glad to be back out there on the track and get this race under my belt. We were able to come away with a solid top-five finish and make up some points, which is a pretty solid day. We had great strategy and Team Chevy brought some great power today, which allowed us to stay up front. Overall, a really good day for our PPG team.”

RINUS VEEKAY, BITCOIN RACING TEAM WITH BITNILE, QUALIFIED 8TH, FINISHED 6TH: “Pretty happy actually. Got in the mess at the start with everyone where I think Pato (O’Ward) spun to the inside, which you don’t see that often. It was a bummer because I think I chose the wrong side and lost some positions there. I think I went from like sixth or seventh to 13th or 14th. So, that didn’t really help but for the rest of the race, good pace. Again, not much luck at the yellow with me pitting just before. That would have brought me much more of an advantage if it didn’t go yellow. I’m pretty happy, because that is stuff we cannot control that didn’t go our way. But everything we could control was great.”

“Today was a tough race. I gave it everything. The first stint on blacks was pretty poor; good in the beginning and then we started losing ground. I feel like the car felt good, but we just didn’t have any pace so we just kept losing positions. The Andretti cars just left us in the distance.

“We started out in like P12 or P13 after the first sequence and from there on there was nothing really happening as we were just doing the same lap times as others on the reds. The car felt good, but I think we had some issue like a dragging brake as we kept losing ground on the straights and it felt a bit abnormal so we will have to look into that.

“We have to nail the details on days like this, and it seems like today we didn’t. To come away with P9, though, were were able to collect some good points. We’ll have a look at everything and go to Nashville.”

“What looked to be like it was going to be a good day, turned out to be really tough for both cars. I got hit during the start which damaged the car and I kind of had to nurse it until the end. We basically went all the way to last place and had to shift strategy-wise. The car wasn’t far off, but this wasn’t a good race for us today.”

CALLUM ILOTT, NO. 77 JUNCOS HOLLINGER CHEVROLET, JUNCOS HOLLINGER RACING , QUALIFIED 19TH, FINISHED 14TH: “It was quite a tough race. We ended up 14thh and ran out of fuel over the line so I lost one position. It was tough, especially in the first half. When the track was low-grip, it was taking awhile to get the car to work, and I was struggling to get past other cars. We had good pace in clean air but I was always stuck behind someone. Once we ended up getting some free air in that last stint-and-a-half. The pace was quite strong, actually. We were catching Pato (O’Ward) but then I had to go into fuel-saving mode… eco-friendly and tried to save it. It was a bit unfortunate. I almost caught him but then almost didn’t finish. But it was a great result to end with. We needed to find a bit of pace earlier in the weekend. We struggled for pace when it was low-grip conditions. Overall I’m happy with P14 from P19. It wasn’t too bad.”

“I made a mistake today in pits, stalling the car. The team gave me a really great car, it was really fast. I can admit when I make a mistake and it was a real shame. We will try to bounce back next week. I am thankful the car was fast as it was.”

DALTON KELLETT, NO. 4 K-LINE CHEVROLET, AJ FOYT RACING, QUALIFIED FINISHED 21ST: “We moved up in the race with the No. 4 K-Line car, so that was good not to finish where we started because we were toward the back after a tough qualifying. We made improvements to the car from the start of the weekend, figured a few things out and was able to collect some spots. It was a decent race overall for us. We’re making some progress on our road-course car. We’re trying to work on showing up for these races and knowing where we need to be in that window. We head to Nashville next weekend and I’m really excited. It was a fun track last year and it will be a fun party in Country Music Town. It should be a lot of fun.”

KYLE KIRKWOOD, NO. 14 SEXTON PROPERTIES CHEVROLET, AJ FOYT RACING – FINISHED 23RD: “It was actually a fun race; we were just on the wrong strategy. We started off on the red tires, which didn’t work out for anyone except Scott McLaughlin and he went long on them. We just didn’t really have the pace on the black tires. From there we went to an old set of reds because it was all we had left. We were the only ones to use reds in practice. We got hit in Turn Nine… that ultimately gave us too much damage to have any pace for the rest of the race. It ultimately put us a lap down with an extra pit stop due to an issue with the rear-right tire from that incident. It was an unfortunate day, but we made improvements this weekend. We’ll take the positives from it, and that was definitely one of them. We’ll go on to Nashville and another street course. Fingers crossed we’ll be good there.”