Power On Pole For The IndyCar Title Decider 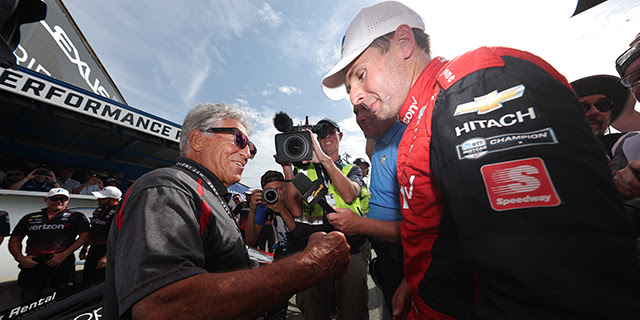 Team Penske’s Will Power in the No.12 Verizon 5G Chevrolet and the championship leader starts today’s Firestone Grand Prix of Monterey at WeatherTech Raceway Laguna Seca from pole position having surpassed Mario Andretti as the most successful pole-sitter in NTT IndyCar Series history.

“It’s such a big day tomorrow that I can’t celebrate much because I’ve got to be so focused on tomorrow. “Tremendous milestone. To be out there with an iconic guy like Mario is amazing. When I think about the era he raced in, how dangerous it was and how much more of a risk it was, it just blows my mind I’m there with Mario.”

Awesome. Ixt know how much I loved qualifying, and I can see he’s the same. Trying to reach and trying to do the lap you know you cannot repeat. That’s what puts you on pole. It (losing record) was coming. It’s beautiful. It’s great for the series and the sport. Records are made to be broken, and it’s with a good man.”

“We once again made it to the Fast 12 and we were so close to making it to the Firestone Fast 6. Unfortunately, with the local yellows I ended up only with one fast lap on the alternate tires. That lap was on the conservative side. I wanted to make sure we got at least one lap in because this track punishes you if you go just a little over the speed limit. If you hit the dust your lap is done. I wanted to make sure we weren’t just P12, I wanted to be up there. It hurts though because I missed it by only 8 thousandths of a second from the Fast 6. Looking back there were some places I could have pushed a bit more to find a few tenths. All in all, it was very, very tight. I think it was a good session for us especially from where we finished in the practices. I think it’s a good result heading into the race.”

Team Penske’s Scott McLaughlin starts the race from eighth place just ahead of Felix Rosenqvist and Marcus Ericssson who spun in the Corscrew on his lap but kept the car going. Speaking following the action he said:

“It was a pretty messy session there, Q1 and Q2, to be honest. Suddenly, we had just the one lap in Q1, but it was enough to advance. Unfortunately, on our Q2 lap, we were catching those cars on preparation laps, and it became difficult because you don’t know what they will do in front of you while you stay on your racing line. I think it is going to be a bit of a strategy game tomorrow with the tires and it will be interesting to see how that plays out. We are in this race, and I am pretty confident about it. I think we can definitely have a good result from where we are starting from.”

Simon Pagenaud and Helio Castroneves start the race from P12 and P13 respectively just ahead of six-time series champion Scott Dixon in the No.9 PNC Bank Chip Ganassi Racing Honda who spoke after the session saying:

“We’re starting right in the middle there. Strategy I think will be key tomorrow. I think we’ve seen a lot of people go off track and cautions could be coming. The start is always interesting here and then also with tire degradation, especially with the reds, it’s definitely going to be a different race than last year. It’s never over until it’s over.”

Rinus VeeKay starts the race from P14 just ahead of Conor Daly and Christian Lundgaard while Kyle Kirkwood starts P17 and speaking to Paddock Eye during the weekend, Kirkwood, who moves to Andretti Autosport next season said that the best part of this season was racing for Foyt,

Colton Herta starts P18 just ahead of Graham Rahal and Devlin DeFrancesco who rounds out the top 20.

Jack Harvey starts P21 just ahead of Takuma Sato and Jimmie Johnson while Dalton Kellett starts P24 just ahead of Josef Newgarden’s who title aspirations took a major hit as he spun in the corkscrew and stalled the car bringing out the red flag. Simona De Silvestro who told Paddock Eye on Friday that she hope that Paretta Autosport is a full-time entrant next season rounds out the order.

“It was a tough day. We got stuck behind drivers who were gapping (pacing themselves out so they had clean air in front for a fast lap) and we just didn’t get to put a (good) lap in which was a bummer. This morning I felt it was going to be a good day because we had improved the car from the first practice and I thought we were going to have a good qualifying result. Anyways, it is what it is and we’ll go out there tomorrow and do our best.”