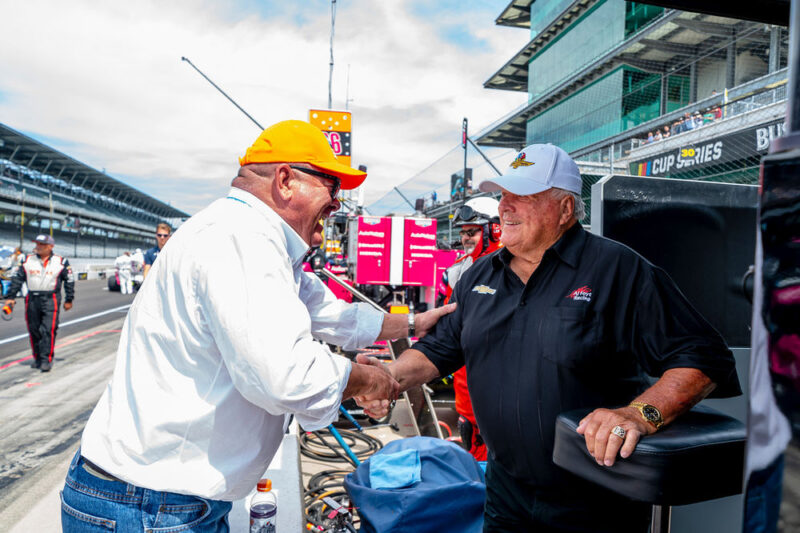 AJ sat down for a Q&A with the team ahead of the race this weekend:

How is your health these days?

Why are you coming to California races?

A.J.: “It’s the end of the year, and I want to see what’s going on for myself. I want to be able to evaluate everything.”

When was the last time you were at Laguna Seca?

A.J.: “Probably the last time was in 1995, my last year in CART [IndyCar Series]. Before that I raced out there twice, and ran second in a Scarab to Bruce McLaren in a sports car race (Oct. 20, 1963). And then I ran an Indy car race but I don’t know where I finished, I might have fell out.” [He competed on Oct. 16, 1988 on the newly configured course but dropped out after 17 laps with gearbox troubles.]

What did you think of the “Corkscrew” (the downhill turns 8 and 8a where cars descend nearly six stories in less than 500 feet of track)?

A.J.: “It wasn’t that bad really, you just had to be prepared for it.”

Looking at the starts and restarts this year, there have been some crazy accidents. Where do you think the problems lie? Any ideas on how to fix them?

A.J.: “On some of those crazy starts, whoever causes them needs to be penalized. The penalties they give them now is nothing, maybe a stop-and-go in the pits or put them to the back of the field; they need to penalize them for a race or two—that’ll make them stop and think.”

Drivers are starting to approach some of your records – like Helio Castroneves joining the 4-time 500 Winners club and Scott Dixon shooting for a 7th title. What do you think about that?

A.J.: “Records are made to be broken and with the equipment they’ve got now, it wouldn’t surprise me to see someone win Indy five or six times. Castroneves really worked hard to win it, he deserved it. Records aren’t going to last forever. But you also have to think about the cars these days, they’re so much better than they were in my day, like the durability of the motors and gearboxes. You didn’t have a button to push to come off [a turn] in fourth, fifth and sixth, you had to manually shift it yourself, and use a clutch. Nowadays, you’re just using the throttle and turning the steering wheel, so it’s a lot different driving the cars today. But talking about Dixon, he’s very competitive and he doesn’t get excited. Even if they’re outrunning him, he’s still running the same pace and that’s what puts him up front usually at the end of the race. I think he’s a very smart driver, he doesn’t get excited and he’s real smooth.”

Did you ever have a championship battle going down to the last race?

A.J.: “Yes in 1967. It was out in Riverside, California on the road course. I went off the track to miss a wreck and I still got hit out there, so I ran back and got in Roger McCluskey’s car and beat Mario Andretti for the championship.”

Had you arranged to get in another car prior to the race if you had trouble?

They don’t allow that anymore, right?

A.J.: “No, they don’t let you do a lot of things. Now they tell you what kind of tires you’ve got to run (primary and alternate tires on road/street courses). It’s not like racing used to be. I won a race with Goodyears on the front and Firestones on the back.”

Did you get in trouble for that?

A.J.: “I was under contract with Goodyear, but like I told them, Firestone chased them all night long. That was in a sprint car. I was on the pole at Indy and went out to the Fairgrounds to run the Friday night before the 500.”

There are some new young winners in IndyCar—more so today then there have been in the last 10 years. Why do you think that is?

A.J.: “They’re good race drivers, but if you put them on a dirt race track, they wouldn’t even make the show. They’re used to running the road courses. They’re familiar with these types of cars [open wheel formula] a little bit and they’re used to this type of racing, which is the biggest thing.”

What would you consider a successful Western Swing?

A.J.: “Naturally to be successful, it would be to win but if we run good out there, I’ll be happy. We’ve won at Long Beach, so we know what it’s like to win. It’s a hard race track, a lot of people crash out there. It’s kind of like Portland, you knew on the first lap there was going to be a crash.”

Do you think the drivers have a different temperament these days?

A.J.: “No; the one thing about racing now, the cars are about a thousand percent safer, so they don’t really think about getting hurt. It’d be a lot different if a lot of them spent a little sheet time in that hospital and think more about it.”

Dalton Kellett in the No.4 K-Line Insulators Chevrolet is looking forward to the race this weekend saying:

Laguna is definitely one of the most historic and iconic tracks on the calendar. I’m so excited that we get to race there. I’ve had the chance to drive there in the Road to Indy and IMSA, but never in an Indy car. I’m sure the Corkscrew section will be very exciting!

“The track surface tends to be low grip, the asphalt is relatively polished and the sand from the run-offs can get blown on the track, so it is a challenging place to get right. With lots of mid-speed corners, having a balanced car that can roll good apex speeds will be important. It’s a short and intense track, the racing should be exciting!”

Next round, Laguna Seca, obviously a really tough track. Very, very tricky, slippery, very old surface that hasn’t been repaved, the last time was 2006! So pretty rough, very aggressive on tires, big tire degradation. Lots of elevation change, camber, off-camber, wheels hanging off in the Corkscrew. A big challenge technically and a big challenge for the engineers to try and figure out a way to get the car to comply and at the same time have enough downforce and platform control that it’s a workable car for the driver. So always a lot of head scratching over there but a big and interesting challenge. We did work quite a bit as well at this one on the simulator. I think we did kind of come back to some of the conclusions that they and I had seen before during our last visit in 2019. So, it will be interesting to see if we land on our feet and get a competitive car right away off the truck and we’ll go from there.”