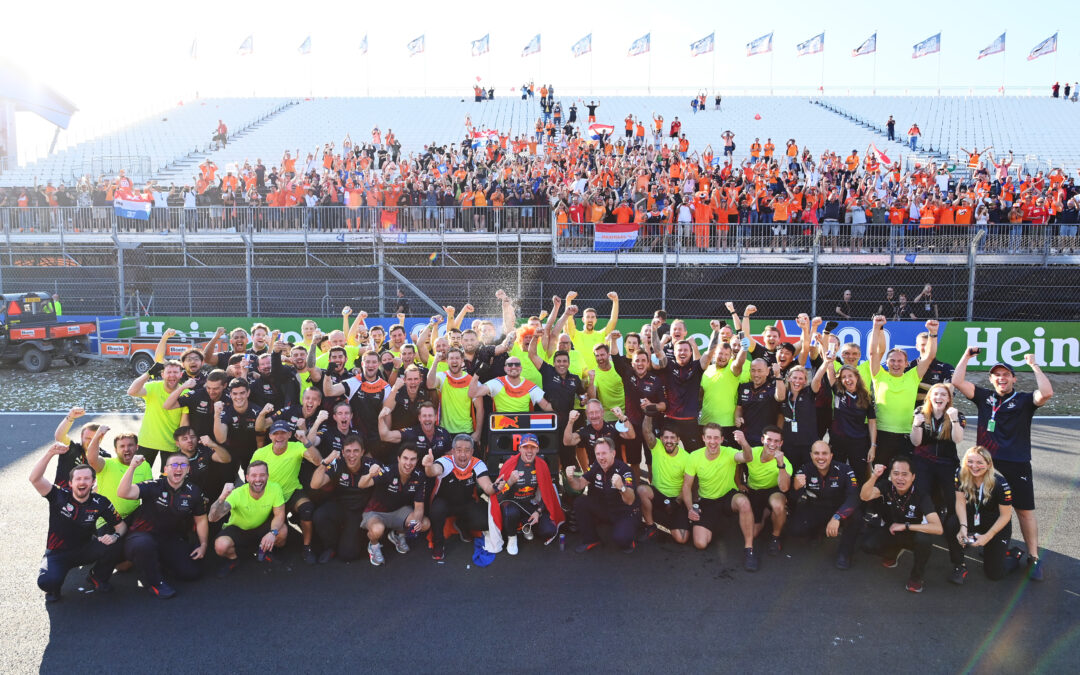 In a Q&A ahead of the race this weekend, Verstappen was asked:

You’ve retaken the championship lead after driving a faultless weekend at the Dutch Grand Prix in front of your passionate home fans. How good does it feel?

I couldn’t have asked for more in Zandvoort but now it’s all eyes on Monza. The Italian Grand Prix is only around the corner and it’s very tight in the championship so the celebrations can wait and some rest between the race weekends will be important.

A sea of orange fans were singing your name all weekend. Did you feel the pressure to perform, especially in the race on Sunday with both Mercedes behind you?

People always think there is more pressure for drivers at their home Grand Prix but for me it’s more enjoyable. You don’t sit in your car thinking you have to deliver because you have to deliver all the time in F1 anyway so it’s no different. From my side it doesn’t really change anything in terms of pressure if it’s your home race or not. Of course everyone does expect a lot from you at a home race so it’s nice to be able to deliver and especially to win in front of the Royal Family, but it was a brilliant performance from the whole Team. Strategically we were very sharp but I’m aware that not every weekend will be like Zandvoort so we have to keep working as a Team and keep pushing as there are still a lot of races to go.

Historically the Monza circuit hasn’t always favoured us. What are your thoughts going into the weekend?

I expect Monza to suit Mercedes as it hasn’t been our best track for the last few years but this year we are more competitive so you never know. If we continue what we have been doing, working well together as a Team, and nail every little detail then we can be competitive but Mercedes might have a top speed advantage on us. The track looks easy on paper but it’s actually quite difficult to nail a lap there because with a low downforce set up and the long braking zone the car is moving around quite a lot. It’s a bumpy track with quite old tarmac and the fans there are really passionate about racing and Formula One. Naturally there is always a lot of Ferrari support there but the fans just love F1 and it’s great to see that energy with the Italians.

We’re second in the constructors standings. Who do you see having the advantage at this stage of the championship?

I don’t think either us or Mercedes have a big advantage over the other. At Zandvoort you could see in qualifying and the race that both of our cars are super close and Lewis was applying pressure for the entire race which meant we couldn’t afford to make any mistakes on the track, in the pit lane or on the pit wall, and we didn’t. I think it’s the finer details where you can make a difference. When you enter a race weekend you have to work hard as a Team on the set-up and fine tuning the little details, that’s where the gains can be made.

Sergio ‘Checo’ Perez had a fantastic race last time out at Zandvoort coming from a pit-lane start to finish the race in eighth place. The Mexican driver was asked:

The Dutch GP fans voted you Driver of the Day after an amazing recovery drive from the Pit Lane to P8!

It’s a shame we didn’t qualify better in Zandvoort because we definitely had the pace to be on the podium and score lots of points for the Team. The circuit was very enjoyable to drive though and I was having fun fighting back through the field, every overtake was on the limit! Now it’s time to look forward to Monza.

Monza is a unique challenge with everyone fighting in qualifying to get close to each other for a tow. If you get it right it can make all the difference but it can also become a mess as we’ve seen in previous years so it’s important to get it right. With Mercedes’ top speed I don’t expect Monza to be our strongest track but hopefully we’ll be in the fight.

This weekend is the second time we trial the new Sprint Race format. What are you expecting?

I’m hoping for a better and more straightforward weekend with the Sprint Race format. The last race we tried it was at Silverstone and I made a mistake which ruined our weekend. It didn’t go to plan so I am looking forward to starting a fresh and seeing how this one plays out.