Rahal Aiming For His Second Texas Victory This Weekend 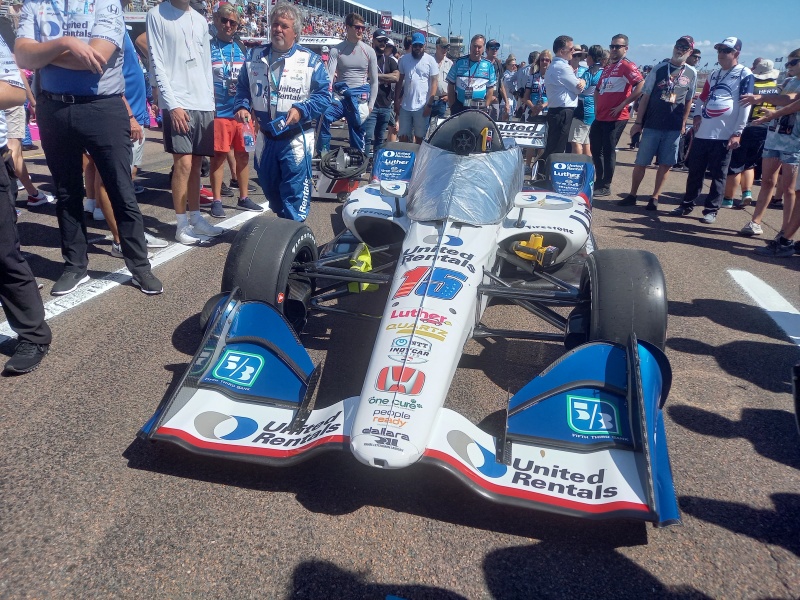 Rahal Letterman Lanigan Racing’s Graham Rahal in the No.15 Fleet Cost Care Honda goes into this weekend’s first oval race of the 2022 NTT IndyCar Series season at Texas Motor Speedway, the XPEL 375, aiming to claim his second victory here having won here back in 2016 when he was part of the closest finish at TMS in IndyCar Series history where he beat James Hinchcliffe and Tony Kanaan. Rahal had a solid opening race in St Pete last month where he finished the race in seventh place and speaking about last year, he said:

The performance last year was pretty good. Getting my fourth podium at Texas was pretty cool but I do know that we had an opportunity to win that race. Every time I got to the front though I was getting very loose so we need to get the car a little more settled so that when we are in the front being able to lead, and being able to do it more comfortably. Last year it was kind of an interesting race with the fuel savings. Whoever was in the lead, it was a massive detriment. Dixon and I went back and forth and back and forth a long time, but I do think we’re one of the teams that are going to be very competitive there. I expect Penske to be good, I think they’ve made good improvements in the off season. Definitely, I think there are some areas that we can improve from last year but generally we were very good.

Christian Lundgaard in the No.30 PeopleReady returns to the scene of his first IndyCar Series oval test this weekend and he is looking forward to getting back on track.

My expectations for Texas are kind of neutral to be fair. I think it’s going to be an interesting weekend for my first oval race and I’m looking forward to it. At the test, you got to a point where you got comfortable with the car, comfortable with driving around at high speeds and turning left. But I think the preparation up to it has been quite extreme. Obviously for me its all new so I want to have as much information as possible. During the test it was a big beneficial factor in that and I’m just looking forward to getting out there and racing around and be around the other 25 cars on track. Its going to be exciting. We were six cars at the test and running in traffic in the afternoon went well and I think that’s where I gained the most confidence really. So now having to go out there and hopefully win the thing — that’s the plan at least — it would be awesome to come and kind of lay your mark on the ovals. I know it’s so different to whatever I’m used to but I’m looking forward to it and super excited. Texas here we come!

Jack Harvey in the No.45 Hy Vee Honda is excited about his 13th oval race start and speaking ahead of the race weekend he said:

This will be my 13th oval start. Honestly, at this point I’m just excited to get back on one. Throughout my time in INDYCAR and Indy Lights, I’ve really enjoyed racing on ovals. There’s definitely a lot of things I’ve had to really work on but I think last year was a big breakthrough for me in general, also was 2020 in general so I feel like we have some really good momentum right now on oval racing. I feel like I’ve got good momentum right now. I’m just excited that it’s another opportunity to go out and have a great weekend.
“The demands at Texas are quite simple: it’s the ability to be comfortable going into Turn 1 where it always feels like the rear isn’t underneath you. You turn into the corner, and you blend in and the car just kind of goes light for a second and it doesn’t feel like there is any feedback from the steering or anything like that. The first time I went, I wasn’t super comfortable with it. Throughout the two races we did last year, I became really comfortable with it and ended up making two great starts, a great first race and in Race 2 we were running third at the time and, unfortunately, we had a mechanical which took us out of the race. Certainly, I feel like we had a podium opportunity. I think oval racing in general is working through it in a methodical way but also then taking that little bit of brain out of it and just understanding that you’ve got to go fast. I know that’s a simple, silly thing to say but oval racing is so much about commitment and confidence and making sure that we have all those things in a good place.

Graham Rahal spoke about the first oval race of the season saying:

To get back to an oval I think it takes a little bit of time to adjust but at the same time, truthfully, for myself and guys like (Scott Dixon) Dixie, people that have been around a long time, you jump in and within a few laps you got a feel for where you’re at. At Texas we don’t have a lot of time, there is not a lot of practice, you go right into qualifying and then go right into the race so you better be ready to compete. I feel good, I’m excited. I know Christian had a good rookie test there so I feel like there is good potential for our team to be fast there. Fingers crossed, we’ve had a lot of success at Texas in the past and hopefully we can make it happen again.

Jack Harvey also spoke about the first oval event of the season saying:

The speeds are definitely higher,” added Harvey. “Any day you are going over 200 mph, obviously it takes a little bit of an adjustment (to get used to) but, to be honest, throughout the off season, we’ve done a little bit of simulator work so I think getting reacclimatized shouldn’t take too long. Obviously Christian just tested there and everything went really well. I’m excited to get going at Texas. Last year was a big breakthrough weekend for me compared to 2020. We just want to build on that momentum that we generated at that track. Obviously, it’s my first outing with Rahal Letterman Lanigan Racing on an oval so we’re just looking to have a smooth weekend and be as aggressive as we can but obviously conscious of the fact that no one wins the race in the first corner but we don’t want to lose it that way either. I’m ready and excited to get back to Texas.

Graham Rahal spoke about the difference between the race being run in March this year compared to its traditional June spot saying:

With people testing there versus those that didn’t, obviously, you would like to test there but we had our opportunity with Christian and it was a beautiful day. I was there and did a few laps right away — four or five — to get the car settled for him but I thought it was a perfect day to be down there, 70 degrees and barely any wind. I know some of the Chevy guys tested there recently but for us, I think we’ve got to rest on what we learned from Christian. We’ve been very competitive at Texas in the past. There are some changes with the aerodynamics with the barge boards, and trim sidewalls and strakes and things that we can use that are to add downforce. And the thing with adding downforce is to make the racing better for the fans. But also the time of year (is a consideration). Racing in March is so different than June, temperature-wise. In June, we were used to high temps and lots of wind. It will be interesting to see what we get in March. But that is somewhat of an equalizer so we’ll see what we get next weekend. I’m excited to go racing.  As I said, it’s a place I’ve had great memories, good success with coming off a strong year last year at the doubleheader getting a fifth and a third there so hopefully it will be a good way for us to kick off this next wave of races.

“The Texas races, honestly, have been so different from the last 10 years,” added Harvey. “I remember watching Graham win and they were running two cars wide the whole lap and that’s not been my experience when I’ve raced at Texas. It’s very much been one lane and just capitalizing on someone else’s mistake ahead of you. I don’t really know what to expect this year. INDYCAR have brought out some different downforce options which perhaps will make the racing a little bit more side-by-side or certainly be able to use more than one lane. Some of the best INDYCAR races on ovals I’ve ever seen have been at Texas so I guess we’re all just optimistic that whatever happens, its going to be a great race regardless.

Speaking about what is needed for a strong race in Texas he commented saying:

The main thing with an oval setup is to have the car as neutral as you can handle and what that means is as little steering as possible,” said Rahal. “The difficulty of that is it’s a very fine line with being neutral and too loose. And if you’re too loose, you’re going to lose it and obviously on an oval that results in a big impact. So we’re always dancing that fine line for us to be strong and to be able to run up front. Of the weight jacker, anti-roll bars and all the tools that we have to adjust, the weight jacker is the most powerful. In essence, what the weight jacker does is it transfers weight from the left front to the right front by utilizing the rear shock absorber. So, if you add pressure, it adds weight to that left front. When you do that, the car is going to turn way more aggressively so maybe when you’re in traffic you’re doing that a lot but when you get out in the lead, you need to be pushing it toward the right side a lot to create stability because you suddenly have a lot more downforce. So, there is a lot of stuff that we chase in the car that we’re trying to utilize to be better.

Jack Harvey spoke about about what it takes for a strong race in Texas saying:

I don’t think, right now, that I’m attached to any particular setup other than trying to find that balance between being comfortable and fast,” added Harvey. “If you’re too comfortable, typically you’re not going to be that fast. And if you’re not comfortable, its just not a fun day so I think at Texas it’s going to be really important to make sure the front is working really, really well, working well in traffic and what comes with that is that feeling I mentioned earlier on where the rear kind of gets light into Turn 1 and just being able to drive through some of that problem so I’m not super-tied to anything (setup wise) other than trying to win the race on Sunday. I don’t mind what we have to do with the car to get there, I’m going to be as adaptable as I can to change my driving, my technique to be able to do it as well. The only thing I’m tied to at Texas is trying to win.