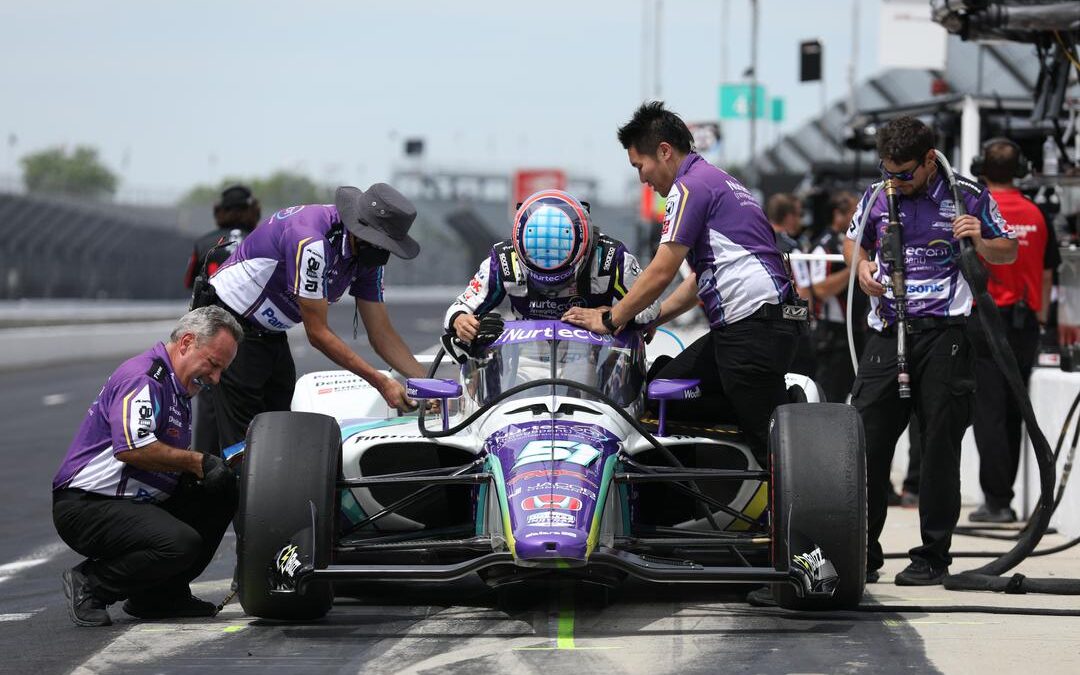 Takuma Sato in the No.51 Nurtec Dale Coyne Racing with RWR was the fastest driver for the second day in a row on Fast Friday at the Indianapolis Motor Speedway as the two-time Indianapolis 500 winner set a speed of 232.789MPH in what were extremely tricky conditions at the Speedway on Friday.

We were lacking downforce on Lap 3 and dropped off on Lap 4. “Lap 3 and Lap 4 are the key. We carried too little downforce. We divided the program so David had more downforce,” Sato said. “It’s good to have at both ends, and we’ll just combine it tomorrow.”

Alexander Rossi made great use of the boost, recording the second-fastest speed of the day with a 231.883MPH completing just six laps on the day. Speaking following the activity, Rossi said:

“Probably the most strange day here at the Speedway. We knew it was going to be pretty chaotic with the winds and temperatures. It proved to be just that, we went out for our first (qualifying) sim and it became a risk versus reward type of day. We know our car is fast. It has been strong all month. The lap we did wasn’t even optimized yet. So we just decided to sit tight the rest of the day and hope the conditions would improve, they did not. So, we’ll go out tomorrow and do the practice. Hopefully, we get a good draw for the qualifying run. But ultimately I think we feel really good about the car that we have.”

Pato O’Ward was third fastest in the No.5 Arrow McLaren SP Chevrolet with a speed of 231.798MPH just ahead of Chip Ganassi Racing’s Marcus Ericsson and his teammate Scott Dixon. O’Ward stated:

“It was a very windy Fast Friday today, but I’m glad that we got our four lap run in. The car feels solid. Today was obviously a struggle, not just for us but for everyone, because the track conditions are shifting rapidly and making one end of the track a lot harder than the other. I think tomorrow, for qualifying, it looks a bit better and I think we’re in a good spot to have a strong qualifying.”

Felix Rosenqvist was sixth fastest with a speed of 231.493MPH and speaking following the action he commented saying:

“Today was a pretty sporty day for us. I went out in the beginning, had too much understeer but the car felt good so we just had to tune the balance a bit. I came out for my second run and it was really good. It wasn’t the cleanest of runs, I kind of missed my run into Turn 1 on one lap, but the lap time still came. That shows that the car has a lot of speed. We couldn’t complete our run due to temperatures, but I think we were one of the strongest cars out there today.”

Defending series champion Alex Palou in the No.10 NTT DATA Honda was 12th for Chip Ganassi Racing ending up ahead of Sage Karam who set a 230.826MPH and Conor Daly.

Romain Grosjean was P15 for Andretti Autosport in the No.28 DHL Honda who set a speed of 230.270MPH and speaking following the action he said:

“Fast Friday – high boost, high speed. We had very tricky conditions with the wind but I think we’re in a good position for tomorrow. We’re going to wake up on Saturday and see what the conditions are and do our best. But definitely a short day here.”

Callum Ilott was 16th just ahead of Chip Ganassi Racing’s Jimmie Johnson who set the 17th fastest time despite hitting the wall slightly at Turn 2 but his car was ok and he set the fastest speed of 229.929MPH.

Marco Andretti was P18 with a speed of 229.850MPH and speaking following the action he said:

“It was not a very eventful day. I literally went out and did one lap just to get a feel for the car in the wind on newer tires. I got it flat but it wasn’t fun. I figured we weren’t learning much today for the actual qualifying conditions. We just ran through some telemetry and other stuff.”

Certainly conditions were very tricky for everyone and no different to us, but the SiriusXM, AutoNation, Arctic Wolf machine looks good. We’re sort of collecting information because we understand tomorrow might be a little bit different and the wind will be much less. Sometimes it’s not worth it to take much of a risk, however, we collected the information we need to prepare for tomorrow.

Super tough conditions today and probably the worst I’ve ever seen in my eleven years at the speedway. With 45 mph wind gusts it’s very hard to get the car to handle right in all four corners. However it’s tough for everyone. We got some running in at the end and it’s really going to be about choosing the right downforce that you need for qualifying considering the degradation on the tires. We’re happy with how the day went and looking forward to tomorrow!

Ed Carpenter was 22nd fastest just ahead of Dalton Kellett and Graham Rahal in the No.15 United Rentals Honda and speaking following the action, Rahal said:

Just a super windy day, very tough day. We didn’t go out until late in the day but even then, it was obviously a little windier but even having said that, there were a lot of guys that could do really good lap times. We are quite a ways off. Balance was very, very tricky there in the qual sims, so we have to put our heads down tonight and figure it out for sure.

Devlin DeFrancesco ended the day in 25th place just ahead of Santino Ferrucci and Stefan Wilson while JR Hildebrand was 28th just ahead of Kyle Kirkwood and Christian Lundgaard while Jack Harvey was 31st just ahead of Juan Pablo Montoya who said:

“The conditions were very difficult today so we did one run to check the systems and make sure everything was set. Tomorrow the conditions will be so different that it didn’t seem worth it to risk the car today. The engineers think we will do a good job tomorrow getting the car to where it needs to be. If we do that, we will be okay in qualifying.”

Colton Herta rounded out the order in 33rd place with a speed of 220.640MPH and speaking following the action he said:

“It was very windy today so we didn’t really run at all. I didn’t do a single lap. I did install laps. The crew worked on a few setup items. I think we’ll make use of tomorrow’s morning practice and be good to go for qualifying.”