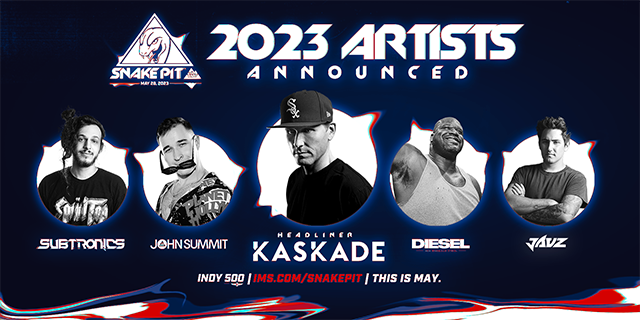 The Indianapolis Motor Speedway announced the line up for the 2023 Snake Pit, the concerts that take place over the course of the Greatest Spectacle In Racing weekend in May.

Grammy Award-nominated musician Kaskade will headline a star-studded lineup of global electronic music artists at the Indy 500 Snake Pit presented by Coors Light on Sunday, May 28 at Indianapolis Motor Speedway.

Subtronics, John Summit, DJ Diesel (aka Shaquille O’Neal) and Jauz also will perform at the Race Day concert during the 107th Indianapolis 500 presented by Gainbridge. Performances begin early in the morning on the stage located in the infield adjacent to Turn 3 of the IMS oval, with specific set times to be announced.

One of the biggest parties of Race Weekend is the Indy 500 Snake Pit presented by Coors Light,” IMS President J. Douglas Boles said. “The always unforgettable and epic party in the Snake Pit is a May highlight for many of our fans and an experience like no other. Music fans won’t want to miss this incredible lineup.”

Tickets for the 107th running of the Indianapolis 500 presented by Gainbridge can be purchased here.