Takeaways From The Firestone Grand Prix Presented By RP Funding 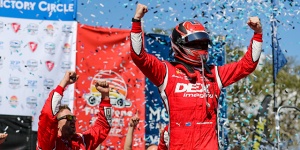 The 2022 NTT IndyCar Series season got underway last weekend with the Firestone Grand Prix presented by RP Funding on the streets of St Petersburg, where Chevrolet came to the front with Scott McLaughlin in the No.3 DEX Imaging Team Penske Chevrolet as the New Zealander not only took his first pole position but he also took his first career victory. McLaughlin’s team-mate Will Power in the No.12 Verizon 5G Chevrolet was extremely fast as he ended the race in third place and it showed that Penske as an organization has made a step forward during the off-season.

Honda Performance Development also had a strong weekend despite not taking victory as defending series champion Alex Palou in the No.10 NTT DATA Honda had an extremely strong race coming from tenth on the grid to finish the race in second place just ahead of Power.

For Chip Ganassi Racing as an organization, that had struggled during the weekend, they bounced back in the race as they had three cars in the top ten at the end of the 100 lap race in St Pete. Honda may not have taken victory last Sunday but they did have seven cars in the top ten with three Ganassi cars, two Andretti cars, Dale Coyne Racing, and a Rahal car.

The series is closer than ever with six drivers having led the race over the 100 laps. The next race in Texas is a completely different kettle of fish compared to St Pete given that it is an oval race and the field test on Monday is going to be a real eye-opening and may go a long way in seeing who is going to be fast when it comes to race in two weeks time. Chip Ganassi Racing’s Scott Dixon in the No.9 PNC Bank Honda is going to be extremely quick here given that he won the Geneyes 300 and the Iceman will be hoping for a repeat performance in two weeks’ time as they he aims to continue his forward momentum after finishing inside the top ten at the Firestone Grand Prix presented by RP Funding.

(Video courtesy of IndyCar via youtube.com)