That Was Definitely A Fun Race 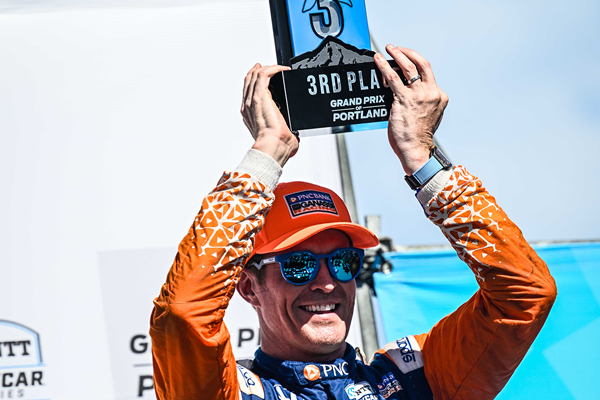 Six-time NTT IndyCar Series champion Scott Dixon in the No.9 PNC Bank Chip Ganassi Racing Honda says that the Grand Prix of Portland was definitely a fun race as he came from P16 to finish the race on the podium in third place.

The result sees the Iceman head to Laguna Seca this weekend in title contentions as he is just 20 points behind championship leader Will Power with just one race remaing.

That was definitely a fun race. We’ve got to work on qualifying and stop making it so difficult on us. The PNC Bank No. 9 had pretty good pace throughout the race today. The fuel mileage was exceptionally easy, which was a huge positive. The drivability was fantastic, so kudos to Honda as it made my day a lot easier. We’re still in the title hunt and we can definitely get this.”

Marcus Ericsson in the No.8 PNC BANK Honda started the race in P18 and came home in 11th place and in doing so remains in championship contention albeit 39 points behind championship leader Will Power.

Starting from 18th, it was going to be a difficult task. On lap one, I unfortunately got off-track and lost a few spots which was not ideal. From there on, I think the No. 8 PNC Bank crew did a good job to get us back up there in the field. We tried a few things with the strategy to get off-sequence. When we were in free air, we were really strong. The pace was pretty good in the No. 8 car. We made some good calls and made our way back up. On the re-start, we started from 16th and made our way to 11th and really showed our potential. It’s a bit disappointing result but it was a decent race.”

Defending NTT IndyCar Series champion Alex Palou in the No.10 RIdgline Lubricants Chip Ganassi Racing Honda is out of the running for the title after finishing P12 on Sunday and speaking following the action he said:

Starting fourth, we were running okay in the beginning and then lost a bit of pace. We’ll check on what went on today and recover next week in Laguna. We still have one race to go, and we will try to win it.”

Jummie Johnson in the No.48 Carvana Honda retired from the race having been hit by Rinus VeeKay.

We were just unfortunate today. Didn’t have the pace that I was looking for today. With the sun being out today, I don’t think the set-up in the car correctly compared to yesterday’s sessions. I was just trying to be polite and make my way around the track at the end, but unfortunately the No. 21 did a fade in the braking zone into Turn 1 after I gave him the position. We made some contact which put us in the wall and took us out.”