That’s What This Place Is About! 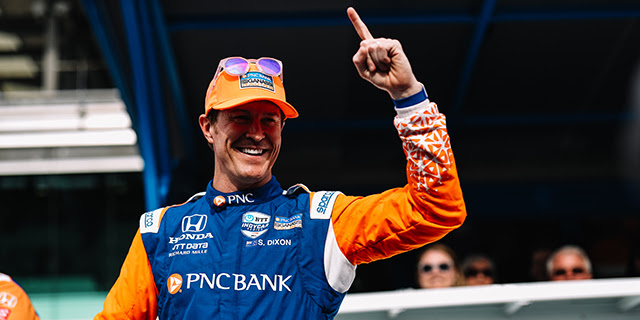 Chip Ganassi Racing’s Scott Dixon in the No.9 PNC Bank Honda was happy with the performance at the Indianapolis Motor Speedway on Sunday as the Iceman scored his fifth Indianapolis 500 pole position for next weekend’s 106th running of the Greatest Spectacle In Racing.

Dixon is not just one pole away to equalling three-time Indianapolis 500 winner Rick Mears pole record of six at the Indianapolis Motor Speedway and speaking following the session the New Zealander said:

“That’s what this place is about; it’s so amazing. “It’s crazy. This PNC Bank No. 9 crew and Honda, they brought it today. Just so happy for everybody.”

“To get five of our cars into the fast 12 and four into the (Firestone Fast) Six, I hope Chip has a smile on his face. “That definitely deserves a smile.”

Dixon’s run broke the all-time pole record speed of 233.718 set in 1996 by Scott Brayton. Arie Luyendyk set the all-time four-lap qualifying average speed record of 236.986 in 1996, but his run came on the second day of qualifications and wasn’t eligible for the pole.

Dixon is joined on the front row by teammate Alex Palou in the No.10 NTT DATA Honda giving Chip Ganassi his first-team 1-2 start at the Speedway since 2008 when Dixon was on pole with Dan Wheldon in second. The Iceman went on to win the race that year.

Jimmie Johnson in the No.48 Carvana Honda was extremely impressive as the seven-time Monster Energy NASCAR Cup Series champion managed to make it into the Fast 12 qualifying as a rookie and will start the race from 12th place and speaking following the session he said:

“Just trying to find that right balance in the race car. “These guys are so good at what they do. In these trickier conditions, I just need more experience.”