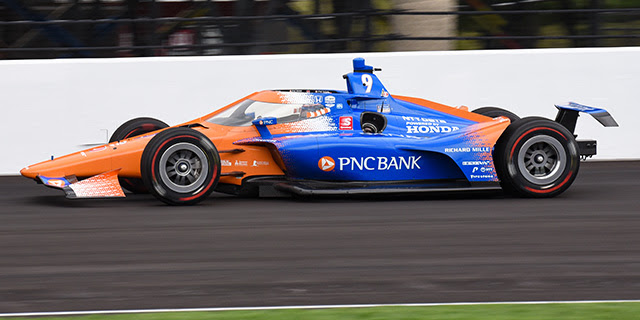 Chip Ganassi Racing’s Scott Dixon in No.9 PNC Bank Honda says the car feels really good following the opening day of the open test session at the Indianapolis Motor Speedway on Wednesday ahead of next month’s 106th running of the Indianapolis 500 presented by Gainbridge on Sunday, 29 May.

Speaking after setting the fastest speed of the day with a 227.187MPH the Iceman said:

“I think the conditions are always pretty ideal when you run this time of year. “The car feels really good. A lot of it depends on track placement and how much confidence you have in the car, how big a tow you can get. I guess we lucked out on that today.

“We still have a bit of a test. We didn’t get through too much of it because the session was kind of fragmented, then obviously finishing early. Still a lot of work to do I think for the tomorrow. Maybe we’ll get a bit of a time extension tomorrow depending on conditions. All in all, I think all the drivers were really confident with how the day went and how the cars felt. But I think that’s maybe across the board because of conditions.

Four-time and reigning Indy 500 winner Helio Castroneves also spun in the same spot during the open practice, careening across the track and hitting the SAFER Barrier in Turn 2 at 5:11 p.m. (ET). Castroneves was unhurt, but his Indy 500-winning No. 06 AutoNation/Sirius XM Honda suffered significant front, right-side and floor damage.

“I didn’t feel anything strange, anything bottoming, I wasn’t pushing. “And the rear just spun out. I was trying to control it, making sure I didn’t crash, and it was a very odd situation. Unfortunately, we couldn’t avoid that. It was very unusual.”

Colton Herta in the No.26 Gainbridge Honda was one of a handful of drivers who had issues on track after hitting the wall at Turn 1. Speaking following the action he commented saying:

“He was going left and right and wasn’t sure, and my brakes weren’t quite locked up yet, so it wasn’t clear which direction I was going,” . “Then I locked them up, and luckily he’s a heads-up driver and got out of the way.”