The End Of An Era For Busch And Joe Gibbs Racing 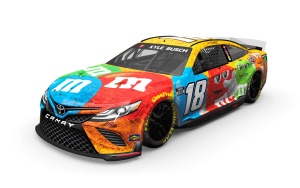 The 2022 NASCAR Cup Series season comes to end this weekend in Phoenix where the championship will be decided. The final race of the year will also see the end of an era as after 15 years of sponsorship M&M’s time as a sponsor to the Joe Gibbs Racing No.18 Toyota Camry comes to end.

It is also the end of an era for Kyle Busch who will compete in his final race for Joe Gibbs Racing before he moves to Richard Childress Racing next season.

To celebrate their time in NASCAR, M&M’s will run a special livery. Busch will drive the No.18 M&M’s Thank You Fans Toyota Camry.

In addition to the special paint scheme on the No. 18 M&M’S Camry this weekend, the Grand Marshal Toyota Camry pace car will be wrapped with M&M’S branding as it circles the Phoenix Raceway mile oval prior to Sunday’s race.

Kyle Busch joined Joe Gibbs Racing at the age of 22 in 2008. The two-time Cup Series champion will be hoping to end his time at JGR with victory.

In a pre-race Q&A, Kyle Busch was asked:

Do you have some confidence at Phoenix with how much success you’ve had there of late?

“I really like Phoenix, and we won there a couple of times since they changed the start-finish line. So much has changed since then. It’s entirely different now, so maybe we can still be good when we go back there, hopefully, but a lot’s been going on in the development of everybody’s cars this year with the NextGen car, so we will see where we stack up and how much has changed since we were there in March. We’ll see what we have this weekend with our M&M’S Camry and we would like nothing better than to spoil the fun and take another trophy home. It’s been quite a ride with M&M’s over the years and it’s pretty cool to have a lot of images of Rowdy Nation along for the ride. We’ll give them all we can this weekend.”

You won two of the first four Cup Series races at the mile oval following the reconfiguration. Do you enjoy racing at Phoenix?

“Phoenix is a pretty neat place, even though they made some changes with the repave and then more recently flipping the start-finish line to a different spot. For some reason, I’ve always run well there. I don’t know if it’s that I’m comfortable being back close to home on the West Coast, or what. I always have a little more fan support out there, as well. As for the track itself, you have two distinctly different sets of corners at Phoenix.”

You have good memories at Phoenix. How does that play into this weekend?

“The last several times we’ve been to Phoenix, we’ve run pretty well, but a few tough  finishes in there for various reasons. Hopefully, that can translate to this time around again. We were decent at Richmond and normally Richmond translates well there. Loudon (New Hampshire Motor Speedway), that translates there, even though we didn’t get to see how good we could be there this summer. I think we can do OK. It’s just a matter of running another clean race and not making mistakes.”

What does it take to be successful at Phoenix?