This Is A Brilliant Result 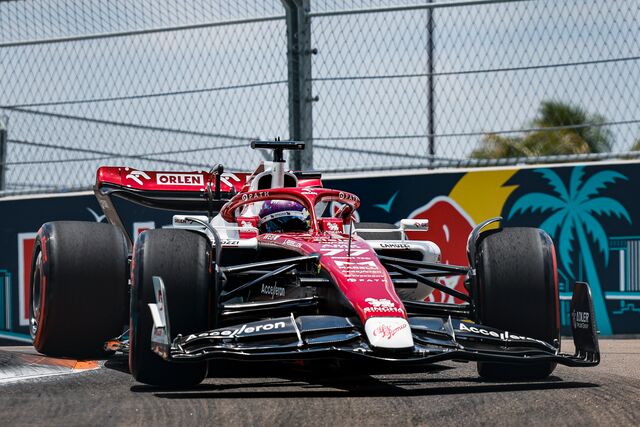 Alfa Romeo F1 Team Frédéric Vasseur says it is brilliant for the Swiss-based outfit to be lining up fifth on the grid with Valtteri Bottas just behind Scuderia Ferrari’s Charles Leclerc and Carlos Sainz and the Oracle Red Bull Racing duo of defending Formula One world champion Max Verstappen and Sergio Perez.

Having a car lining up fifth on the grid, just behind the two dominant forces of the championship, is always a brilliant result. Valtteri delivered a really good lap when it counted and he can be rightly proud of this effort, but this is a result for the whole team: for the crew that rebuilt a good car after yesterday’s crash, for the engineers that maximised the only practice session they had, and for all our colleagues back at base who gave us the tools to fight for a third-row start. Unfortunately, we weren’t able to celebrate a good result with two cars: Zhou was forced to abandon his fastest lap as he ran into a group of nearly stationary cars at the end of his lap, and that meant he had to bow out in Q1. We will have a big job ahead of us tomorrow, but we are confident we can make up some ground, especially around here as the race will be unpredictable. As for Valtteri, we’ll need to deliver a good first lap and a clean race, and we’ll fancy our chances to come home with a strong result.

Valtteri Bottas set a qualifying time of 01:29.475s and speaking following the action the Finn said:

“I am really pleased about today’s performance. It was a great recovery from yesterday, when we didn’t have an easy day. A big thanks to the whole team, they delivered when called to the task of rebuilding the car. Today we had a big job to do: we had a good FP3, we had a clear direction for our set-up and the car was really quick. It was down to me, then, to find a good rhythm and by Q3 I had definitely found it. I really enjoyed the last lap of Q3! Coming into the weekend, we saw some signs of what we could do so I am not surprised we’re up here, but of course I am pleased all things turned out well – it’s just a shame Zhou didn’t make it during Q1, when I nearly dropped out as well. Now we’re in our best prospected scenario, behind the Ferrari and Red Bulls: we know that, realistically, fighting them will be difficult, but this is racing so you never know what is going to happen. We just need to focus on our race and, if there are opportunities, take them. Tomorrow will be a challenge, it will be hot for the car, the tyres and the driver – a hot and sweaty race. We have a good race car so we can fight to be in front of the midfield: a top five finish has to be our minimum target.”

Zhou Guanyu starts the race from 17th place following a time of 01:31.020s and speaking following the action he said:

“It’s frustrating to miss out on Q2 for the first time. We could only do one push lap at the end, when the track was improving: we were out of phase and when I got to turn 17 on my final lap, there was a whole group of cars stopped in front of me, so I had to give up on my lap. Otherwise, I think I could have been into Q2 today as well. Tomorrow will be a challenge, overtaking won’t be the easiest but it’s a track where it’s easy to make mistakes, so we need to be ready for any opportunity. We’ll try to move as far forward as possible, we have a good car and we will do our best.”