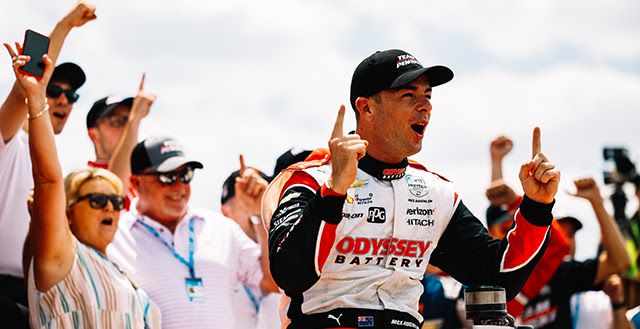 Team Penske’s Scott McLaughlin in the No.3 Odyssey Battery Chevrolet says it is amazing after he took victory in Sunday’s Honda Indy 200 at the Mid-Ohio Sportscar Course. Starting the race from second place on the grid he took the lead and was delighted with the win.

This is amazing. “I’m really proud of the (Team Penske crew). The car they gave me was a little hard to drive toward the end. I would love to make it a little bit easier for myself, but I’m super proud of them.

“You’re thinking about fuel (at the end of the race), but thankfully Chevy gave us great fuel mileage and drivability off the restarts that allowed me to get a bit of a gap from Palou.

The victory was not only McLaughlin’s second of the season, but it was also the first time that his mum and dad were able to witness their son claim victory.

Oh, I really wanted to get a win here with mom and dad for the first time. “To have mom and dad here on America’s weekend is awesome.

The New Zealander went on to say:

It’s amazing. I really wanted to get a win with mom and dad here. It was our first time we had Odyssey Battery on the car, and you know it was it was awesome as well to have them on board, but that mom and dad is very special on America’s weekend. Last night I was dressed up as a bald eagle, so maybe I need to do that every year on July 4th weekend. It was tough, you’re thinking about fuel but thankfully Chevy gave us the great fuel mileage and drivability off the restarts that allowed me to get a little bit of a gap from Palou and the Honda. I’m really proud of the guys for the car they gave me even though it was a little hard to drive towards the end. I would love to make it a little bit easier for myself but I’m super proud.

Will Power in the No.12 Verizon 5G Chevrolet came from 21st on the grid to finish the race in third place and speaking following the action he said:

Amazing day for the Verizon 5G Chevy. I said in a strategy meeting, which I have a few times this year, we’ve qualified bad and a top-10 would be great. The yellow when we were 12th, I thought, OK, we can be in the top-10 here. Good restarts, good exchanges, good pit stops, good strategy. Great job by the team. Over the moon, loving it man. Starting at the back is more entertaining than leading at the front! We’ve got to get on top of the qualifying. It wasn’t a pace issue at all. I can’t thank Verizon and Chevy enough. We’re having such a great year.

Josef Newgarden in the No.2 PPG Chevrolet started the race from 14th and came home in P7 and speaking following the race he said:

It wasn’t a great day or bad day either. At the first pit exchanges we really worked up to seventh or sixth place and then a couple of cautions came out. The final pit exchange we were looking to make something happen on new reds a yellow came out right after. Sometimes that helps you because it closes the pits, but they waited for everybody else to pit. We lost out to the blend line and ended up losing three spots in that exchange, which put us back to seventh. Just kind of bad luck all day with the way the yellows worked out. They weren’t really favoring our strategy but it’s good day for Scott (McLaughlin) and we’ll go to the next one.