Today Is What It Is 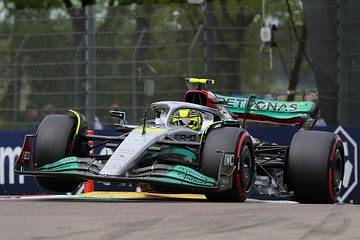 Mercedes AMG PETRONAS F1 Team’s Lewis Hamilton says his result of P14 in Saturday’s Sprint race at the Emilia Romagna Grand Prix for Sunday’s main event is what it is.

Today is what it is – a lot of work is going on in the background but ultimately, we haven’t got it right yet this year and everyone is working as hard as they can to correct it. The team have been through many, many tough years. Most of the people that I’m working with have been with this team for more than 20 years, so they’ve been through it. It wasn’t the greatest of years in 2013 but we’ve had great years since then. We stick together, we try to motivate everyone. This is the situation that we are faced with and everyone’s got their heads down, working. We are fighting to understand the car and improve and progress through the year. That is all we can hope for right now.

George Russell felt it was not an enjoyable event as he starts the race from P11 and speaking following the Sprint race he said:

It wasn’t very enjoyable for us today and it was difficult to overtake, we had some good pace but not the speed in a straight line to really make progress. The sprint races are very short and there isn’t time for the tyres to start degrading, creating differences between drivers and cars, opening up opportunities. We didn’t make strong starts today which is unlike us, we’ve made solid starts recently. Strategy is going to be key tomorrow, we’ll have to do something different to our competition, that will give us opportunities to fight and move up the grid. It’s been a difficult weekend so far for us, tyre warm-up has been difficult, we need to get on top of things and capitalise on what is possible tomorrow.

What we saw today was a car without enough of a performance differential to the midfield cars to make the overtakes. If we were running in free air, the picture would be similar to previous races where we moved forward but behind the cars in a DRS train, the car didn’t have enough performance to make progress. Point-scoring needs to be the minimum for tomorrow and we know that isn’t any where near our expectations, so it’s a humbling experience. We understand our problems, we have a direction to unlock the potential that is within the car to bring us much closer to the front but at the moment, we don’t have the key. Therefore you just need to grind away and rely on the science and the physics. The passion and determination to improve is there in every team member.

We were hoping to move forward this afternoon but we’ve ended up back where we started with George and slipping back one place with Lewis. The starts were OK, the drivers both lacked a bit of grip on the first lap to attack but also got boxed in position with cars around them and the outside line through turn 2 to 4 was moving quicker. For the remainder of the race, both drivers were affected by being in a DRS train and just couldn’t gain on the cars ahead. We’re going to have to prepare ourselves for a tough afternoon tomorrow. The longer race should allow the cars to spread out more which will help but we’ve got a lot of ground to make up if we want to get into a good points-scoring position.