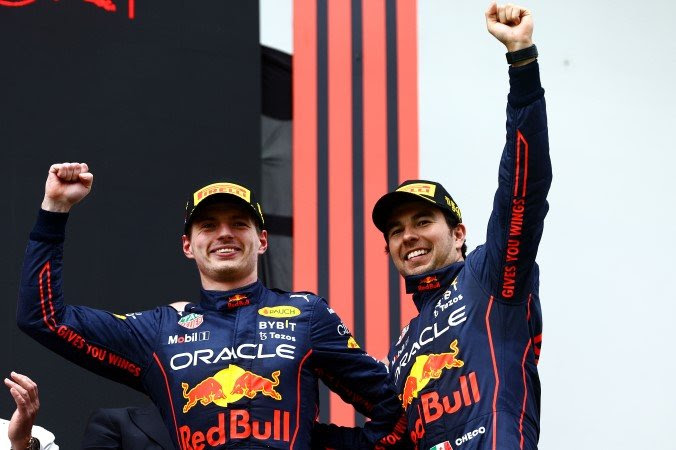 Defending Formula One world champion Max Verstappen scored maximum points in Sunday’s Emilia Romangna Grand Prix at the Imola circuit after a dominant display. The Dutch driver who won Saturday’s Sprint Race put on a fantastic display on Ferrari’s home soil to score his second win of the season and speaking following the race he said:

“To have a weekend like this for both of us with a one-two for the Team is just incredible. It was a very lovely Sunday! Everything today was well executed, coming into the weekend I didn’t expect it to be like this. It was more or less a perfect weekend, everything went well for us and we’ll of course enjoy today. I scored the maximum amount of points this weekend and we can be really proud of that as a Team, it’s a great boost. Today was all about judging the conditions, making the right calls and staying very focused and I think we did that very well. We need to keep focused and we know that at the next race we need to be up there again and keep this going.”

Sergio Perez had a great race as he ended the race in second place and speaking following the race he commented saying:

“It was a tough race but an enjoyable one. Rule number one in these conditions is to finish. It was difficult because in these conditions it is easy to make a mistake and put a foot wrong but we managed a clean race and kept out of trouble, which was pretty important. I got a great start and the restart was good too, then I think the Team did a great job with strategy out there. On the intermediates I was really thinking to save the tyres but the degradation was high and Charles was really fast towards the end of that stint so I was happy to just keep him behind. The race was pretty intense with Charles, he was always within an undercut range and when we thought we had him under control he boxed and made things a lot harder for both of us. We were both pushing with cold tyres and, in fairness to Charles, it was easy to make mistakes. We have had such a difficult start to the season with reliability concerns and DNFs, so it was really important we brought it home today – it is a great result for the Team.”

“This has to be one of our best ever results, to take the maximum points across the whole weekend, bar one, was incredible.  Both Max and Checo have driven brilliantly to secure our first one-two finish since Malaysia in 2016. I’m very proud of the entire team, from everyone at the track and those back in the factory at Milton Keynes, they delivered a phenomenal performance, it’s just what we needed to rebound from Australia. It’s a long season and we’ll take a lot of confidence from this result and try to build on it in Miami in a couple of weeks’ time.”