We Have Some Things To Improve For Tomorrow 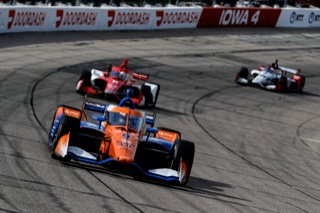 Scott Dixon in the No.9 PNC Bank Chip Ganassi Racing Honda had a fantastic opening race in Iowa as he came from 13th on the grid to finish the HyVeedeals.com 250 presented by DoorDash in fifth place and in doing so has closed the gap in the championship standing to 38 points.

It was an interesting day. For us, it was really tricky, trying to get the [chassis] balance right. At the start, we were quite loose [fighting oversteer]. But the team made a great call [pitting on an early, Lap 17 caution]. We were able to put on new tires and work our way up to the lead pack. Our car was really good on long runs, which allowed us to make up a lot of ground in the closing laps; and Honda as always, did a tremendous job. [Teammate] Jimmie Johnson, did an amazing job, it was fun to watch, he was constantly trying new stuff out there. We have some things to improve for tomorrow, but looking forward to it, as always.

Jimmie Johnson in the No.48 Carvana Honda was delighted with how his race went saying following the event:

“I learned a lot out there, and I’m glad we get to come back and do it again tomorrow.  I think I now have a better idea of what I need my car to do next time.  We were a little aggressive with our [chassis] setup, and that was hard on the right rear tire.  It really showed itself at the end of each run, so that unfortunately cost us several positions in the final laps.  It was great battling [with several series front runners], I learned a lot from several other drivers, but I think the most fun I had was with [Rinus] VeeKay.  I learned some race craft that is specific to Indy car racing, it’s a lot different from other series.

“Tough day at the office. That’s racing, good days and bad days, you learn most and challenge yourself with the bad days…..it sucks though! We seem to go forwards and backwards in equal measure, but unfortunately at the end of this race it was a little bit backwards. This place is all about tire management, handling, traffic, and we didn’t quite have it today. But, tomorrow is another day. We’ll regroup and see what we can do! Onwards and forwards.”