We Need To Finish The Job Tomorrow 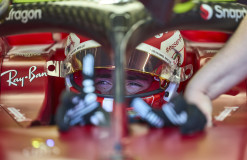 Scuderia Ferrari’s Charles Leclerc lead a team 1-2 in qualifying for the inaugural Miami Grand Prix on Saturday after he set a time of 01:28.796s.

Pierre Gasly is seventh just ahead of Lando Norris and Yuki Tsunoda while Lance Stroll rounds out the top ten.

The Haas F1 Team’s Mick Schumacher ended the session just ahead of his team-mate Kevin Magnussen.

Guanye Zhou is 17th just ahead of Alex Albon and Nicholas Latifi while Esteban Ocon rounds out the order in 20th.