Whew, That Was Really Good 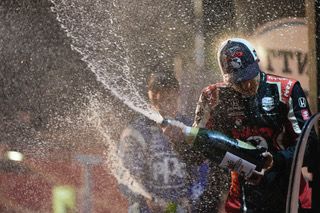 Dale Coyne Racing with HMD Motorsports David Malukas in the No.18 Honda had a fantastic night at World Wide Technology Raceway in the Bommarito Automotive Group 500 on Saturday night as he scored his first podium finish as an NTT IndyCar Series driver, having started the race from 12th on the grid he came through the field to finish the race in second place just behind race winner Josef Newgarden.

“Whew, that was really good! Wow! We knew the car was going to be good and it was just getting better and better. And, from the practice yesterday that was around the same time [as tonight’s race], we knew that the cooler the track got, the better our car was compared to the others. So, this whole red flag deal [during the rain delay], I was just like, Please, please let it go green again! And when it went green, I knew that the car was just amazing. I’m not gonna lie though, being up in the front against [Will] Power and Pato [O’Ward], they know how to defend, they know how to block lines, it was really tough to get around them. All in all, the team did such a good job. They deserve it. What a good race!”

Takuma Sato in the No.51 Nurtec ODT Honda for Dale Coyne with RWR started the race from eighth and came home in fifth place and speaking following the action he said:

This place has always brought us excitement and here we are again! I think it was a fantastic race for the spectators. I was pleased to bring home a top five for Honda, but we needed just a little bit more help. There were some guys a few laps down that didn’t let me go, and I think that cost me a
place or two. But, nevertheless, I’m thankful for Dale Coyne Racing with RWR and Honda. What a great result for all of us. Congratulations to David (Malukas) on his first podium.”