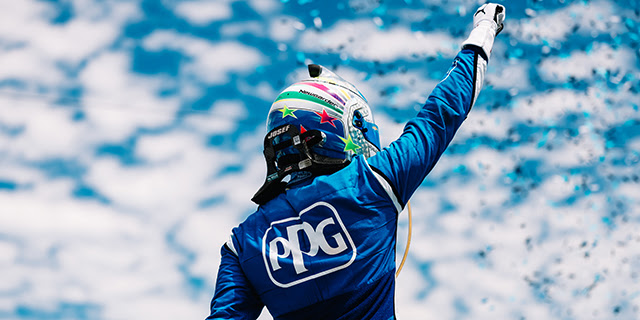 Two-time NTT IndyCar Series champion Josef Newgarden in the No.2 PPG Team Penske Chevrolet says that you have to be on your toes at all times in the series after the Tennessee native beat Chip Ganassi Racing’s Marcus Ericsson and Andretti Autosport’s Alexander Rossi to victory in the Sonsio Grand Prix of Road America.

Newgarden, who qualified in second place not only scored his third win of the season but in doing so he also claimed the PeopleReady Force For Good Challenge Award, speaking following the action he said:

To finally get it done and most importantly to give that money to charity, half of that money is going to charity with SeriousFun Network and Wags and Walks Nashville. “I hope they’re happy about it. That’s a lot of money coming their way.

“You’ve got to be on your toes at all times (in this series). You can go in with a plan, but you probably have to change your plan 90 percent of the time once the race starts to unfold. To be able to hit all these disciplines with this team, for me it’s the best series in the world.”

Newgarden led a race-high 26 of 55 laps, taking the top spot for good during rivals’ pit stops on Lap 43.

“I was just trying to stay focused on what I had to do,” Newgarden said. “Just an unbelievable job by everybody at Team Penske.”

Will Power in the No.12 Verizon 5G Chevrolet was livid after a collision with Andretti Autosport’s Devlin DeFrancesco at the start of the race set him down the order having started the race mid-pack in P15 and coming in 19th place and speaking following the action he said:

STILL SECOND IN THE CHAMPIONSHIPSHIP, BUT WHAT MIGHT HAVE BEEN. YOU ALREADY HAD A LONG WAY TO GO FROM THERE, BUT WE HEARD YOU AFTER THE CONTACT WITH DEVLIN DEFRANCESCO IT WAS “WAIT UNTIL I SEE HIM.” HAVE YOU SEEN HIM AND YOU’VE HAD A LITTLE BIT OF TIME SINCE THEN, HOW ARE YOU FEELING ABOUT THIS?

“Yeah, no I haven’t seen him. I mean, we had a fast car it’s just I kind of wondered if we changed tires when we were doing the wing. We didn’t want to go down a lap obviously. That made our day a lot harder. Yeah, nothing I could do about that one. That is Indy Car. Not the best day, you have them. Just move on to the next one.”

THIS DOES SEEM TO ALIGN WITH THE NEW MENTALITY THAT YOU’VE HAD OVER THE LAST YEAR OR SO. YOU’RE TAKING THIS BETTER THAN A LOT OF PEOPLE WOULD AT THIS POINT.

“Man, you can’t really do much about it. He is a young guy and he’s made some big moves this year that resulted in some incidents. It was good on the team for at least, I got ran off on the last lap there so maybe we could have finished a little bit higher. We had plenty of push to pass, couldn’t do much about it. We’ll see if we can get the Verizon 5G Chevy to victory lane again this year. Anytime we get a victory in this series it’s so big, because it’s so hard. There’s a different winner every week. Except for Newgarden, obviously congrats to him. He won the charity prize and yeah, he’s won three races. He’s on a good run.”

Scott McLaughlin ended the race in seventh place in the No.3 Sonsio Chevrolet and speaking following the race he said:

“Overall, pretty good day for the Sonsio Chevy. We started eighth and finished seventh. Nearly got sixth on the line. We’ve been chasing set up all weekend, but solid points day for us in seventh. We will just keep building from there. Onto Mid-Ohio. We have a couple of weeks off, we’ll be ok.”