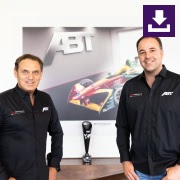 The ABT Sportsline team who were a feature in the ABB FIA Formula E world championship from season one to seven. ABT has sourced a powertrain for 2023 and will join the rest of their rivals with Gen3 car.

The team won the first ever Formula E race in Beijing in 2014 while Lucas di Grassi steered to the Drivers’ title in 2017. ABT sealed the Teams’ crown a season later and partnered with Audi between 2017 and 2021.
Hans-Juergen Abt, Managing Partner says:

Formula E has always had a big place in our hearts and we have never made a secret of the fact that we want to be back.  Abt and the team’s aim is to put together a perfect package alongside Head of Sports Marketing Director Harry Unflath and CEO Thomas Biermaier. “After the internal kick-off, we are now talking to our current and potential partners. The goal is to bring a strong team to the championship, both on and off track.”