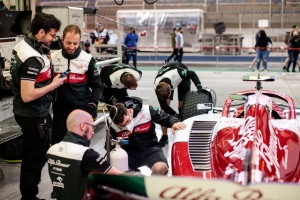 The Alfa Romeo F1 Team announced on Friday that they are launching three new social media channels in China. With China’s first ever Formula One driver, Zhou Guanyu, ready to make his debut in this weekend’s Bahrain Grand Prix, the team made a step to reach nearly 1.5 billion potential new fans through its new Chinese language channels on Weibo, WeChat and Douyin.

The team’s channels will feature much of the fan-favourite content that made Alfa Romeo F1 Team ORLEN a darling of supporters around the world, but will mostly feature dedicated content devised and produced exclusively for the Chinese market, offering fans a unique way to experience the team.

We are excited to open three new social media channels for our fans in China. The love and support we have received from the country since the arrival of Zhou Guanyu have been beyond our wildest dreams and we’re delighted to welcome all the new fans to the Alfa Romeo F1 Team ORLEN family. Zhou is a trailblazer in his country and we are excited to be writing the history of motorsport with him – these channels will be our way to chronicle this historical moment. Our decision to create exclusive content, in Chinese, for this wide new audience shows our commitment to our #GetCloser mantra and to turning the millions of new fans who may be just watching Formula One for the first time into die-hard supporters of the team.