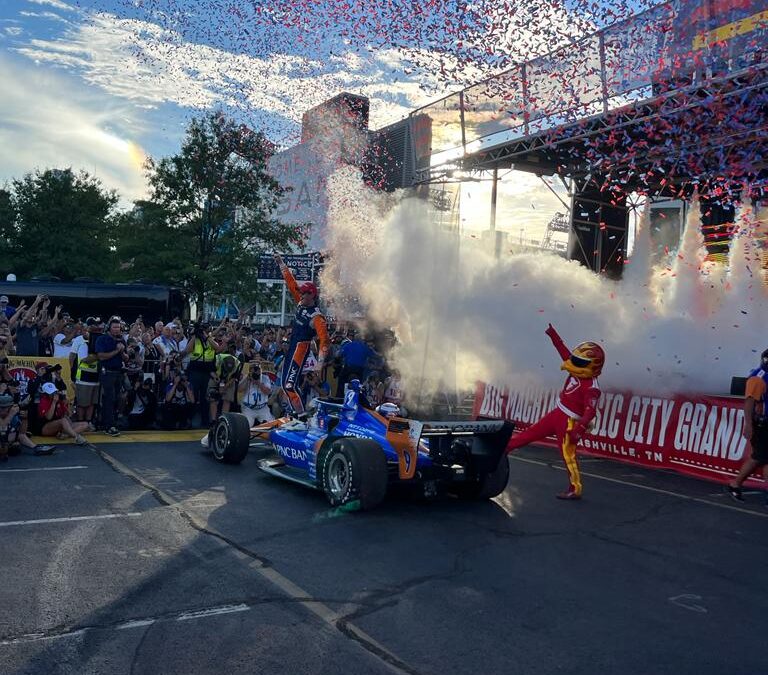 Six-time NTT IndyCar Series champion Scott Dixon in the No.9 PNC Bank Honda gave Chip Ganassi back to back victories on the streets of Nashville to claim his second win of the season following a chaotic race following a lengthy delay due to inclement weather.

The Iceman fell back to the rear of the field following a multi car crash that he was caught up in having started the race from P14.

The New Zealander who was hit from behind and the team had to beat his right rear tire off his car which received a considerable amount of damage however he clawed his way back to overcome it and take victory and closed to within 6 points of championship leader Will Power.

Pole-sitter Scott McLaughlin in the No.3 DEX Imaging Chevrolet for Team Penske was second while Alex Palou finished third.

Alexander Rossi came from the back to finish fourth just ahead of his team-mate Colton Herta and Josef Newgarden who brought out a late race caution following contact with Romain Frosjean which resulted in a red flag.

Felix Rosenqvist came home in seventh just ahead of Christian Lundgaard. Herta came from a lap down following contact after hitting the wall on the third lap but repairs helped him recover from a lap down.

Will Power was 11th just ahead of Rinus VeeKay and Helio Castroneves who was the last driver to be classified.

Next up is the final oval event of the season at World Wide Technology Raceway.