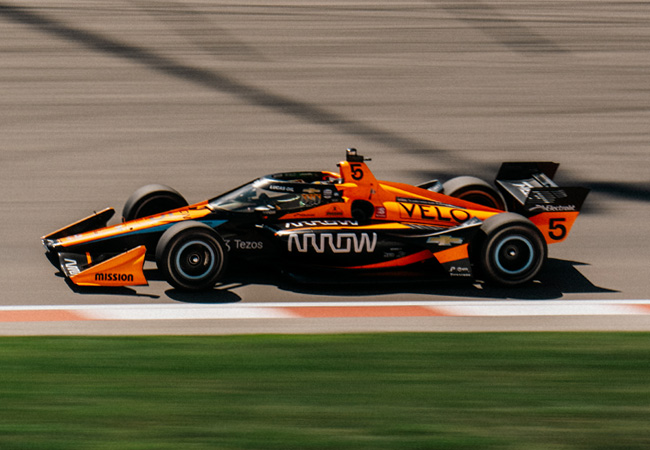 Arrow McLaren SP’s Pato O’Ward in the No.5 Arrow McLaren SP Chevrolet will roll off from seventh on the grid for tonight’s Bommarito Automotive Group 500 at World Wide Technology Raceway with a two-lap average speed of 180.303MPH and speaking following the action he commented saying:

We qualified seventh today and it’s a track position race. There will be a lot of emphasis on getting the in and out laps and pit stops right tomorrow for the race.

“I’m happy with the No. 5 Arrow McLaren SP Chevrolet. I think we’ve got some work to do in certain parts of the track. But, I think in general, we’re in the window. We’ll just clean the car up a bit and see if we can make it just slightly better. Then, I think we’ll be in good hands tomorrow.

Felix Rosenqvist in the No.7 Vuse Arrow McLaren SP Chevrolet will start today’s race from the back of the grid after spinning during his run in qualifying and speaking following the action he commented saying:

It was a pretty rough day, roughest in a while. I had a spin in qualifying, so we’re starting from the back. And in Practice 2, when we were practicing for the race, we had a fuel leak so we had to abort the session after 25 minutes. That’s pretty tough. We didn’t get to do any pit stop practice either. We’re just going to have to wing it tomorrow, but the No. 7 Arrow McLaren SP Chevrolet team will stay positive and see what we can do tomorrow.

There were positives and negative from the day. I think a day like this can be really tough on people if things go wrong. Obviously, qualifying was a bit disappointing for Felix. The team felt like he had a really quick car. I think he just tried to push it a little too hard and just went over the limit with what the car had to offer; it’ll be fine for the race. It looks like he had a small issue as well with the fuel cell in the final practice, so they’re back on the pad fixing that now. We’re still confident going into tomorrow but bummed Felix didn’t get the result in qualifying that he deserved and didn’t get the laps he needed in this afternoon session. Ultimately, the No. 5 Arrow McLaren SP Chevrolet carried the ship today. We’ve got plenty of data to look at, and both cars are really similar so we will be in good shape tomorrow.